Under the Oaks (published in the volume, Mooi Street & Other Moves – Wits University Press) was showcased at the PACT LiquifruitPot Pourri Festival in September 1984. Corky was played by James Borthwick, Richard by Graham Hopkins and Beatrice by Jenny Sharp. Direction was by Franz Dabrowski.

In December 1984, the play was performed as part of the Oude Libertas Summer Festival in Stellenbosch with James Borthwick as Corky, Neil McCarthy as Richard and Jenny Sharp as Beatrice. Direction was by Paul Slabolepszy.

In July 1985 it began a national tour (as part of a double bill with Over the Hill) at the Grahamstown Standard Bank Festival of the Arts with James Borthwick as Corky, Jonathan Rands as Richard and Kate Edwards as Beatrice. Direction was by Paul Slabolepszy.

In December, 1989 Under the Oaks was revived under the banner of SNAP Productions during which it enjoyed a national tour (on the same bill as Over the Hill). James Borthwick again played Corky, Christopher Wells played Richard and the part of Beatrice was played by Shirley Johnston. Direction was by Bobby Heaney.

“Okes superb in UNDER THE OAKS… I can only marvel at the almost impeccable characterization in this one-hour play… a masterpiece…!

“Magnificent… the next best thing to vintage Pollock…!”

“With this work, Slabolepszy has proved himself among the foremost South African writers in the comedy genre…”

“Humour hides little stabs of truth in UNDER THE OAKS… Borthwick is brilliant as Corky, capturing the mannerisms of this character to a T…!”

Often performed as part of a double-bill with Over the Hill,and utilizing the same actors in both plays, Under the Oakshas as its setting the famed oaks at Newlands Cricket Ground. Casually-attired Corky Labuschagne, self-proclaimed Number One Western Province Cricket fan, is ensconced in his seat beneath the oaks, awaiting the start of the third day of a match between perennial rivals from ‘Up North’ and his local team…

When the bespectacled, dapper, Richard Hopcroft, a visitor from Kwazulu-Natal arrives (resplendent in jacket-and-cravat), we know we are in for an interesting ride. Cultures collide as these two vastly different personalities discuss anything and everything from cricket to climate change; moments hilarious, triumphant and testing. When Corky’s wife, Beatrice, arrives (having forgotten her husband’s beers!) we’re into a whole new ‘ball-game’…

“The contrast between virile pioneer and effete settler is glaringly drawn in Under the Oaks – between Corky, the Western Cape Boer, and Richard, the Natal Brit… the Boer is earthy, ebullient, anarchic, living for brandy-and-coke and the outdoors. The Brit is tight sphinctered and over-civilised, a stranger to Newlands. Much of the comedy in the play has to do with the audience’s recognition and acceptance of these stereotypes. The play has a fugitive sense of impending violence as well, related to the suggestion of conflict between the two characters…” 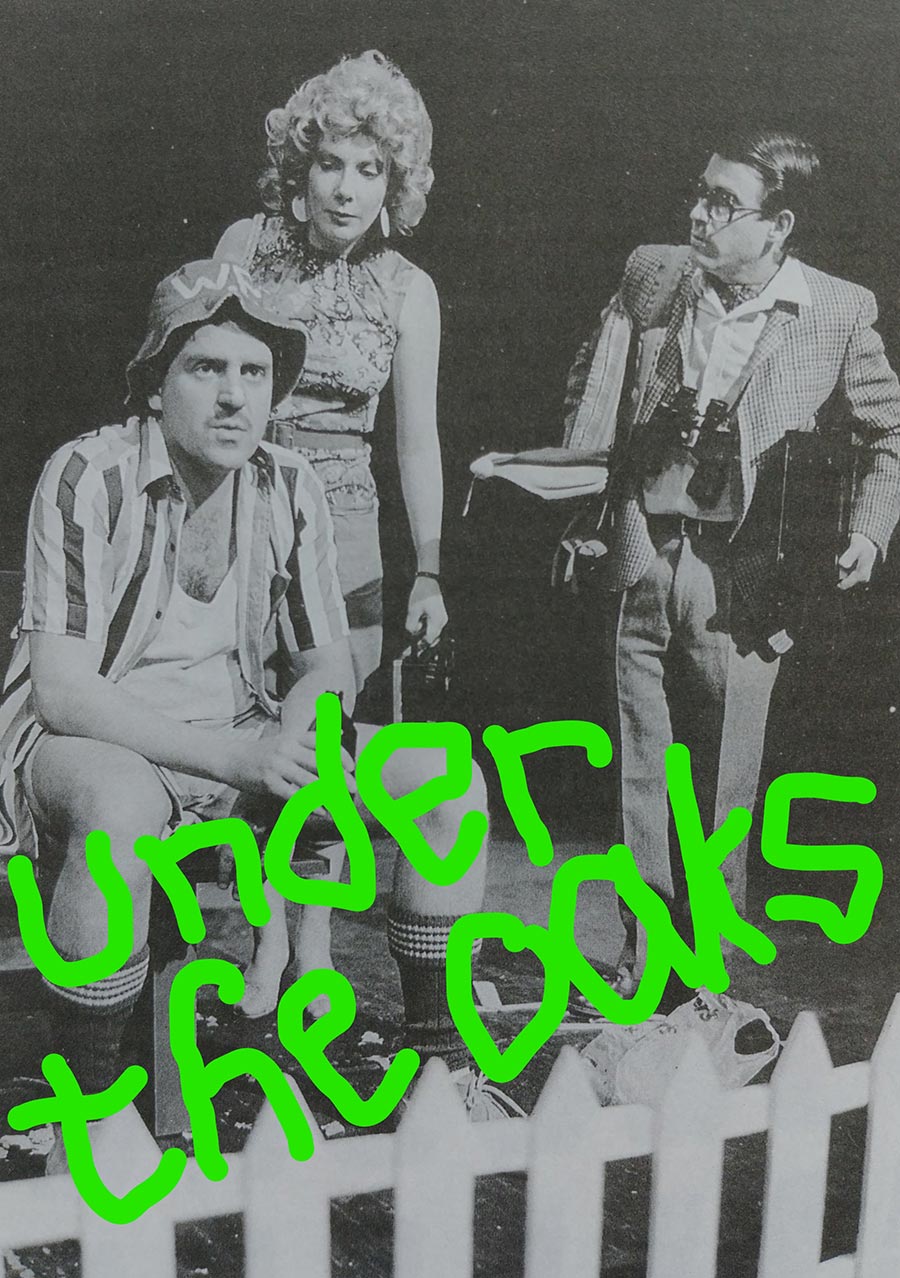